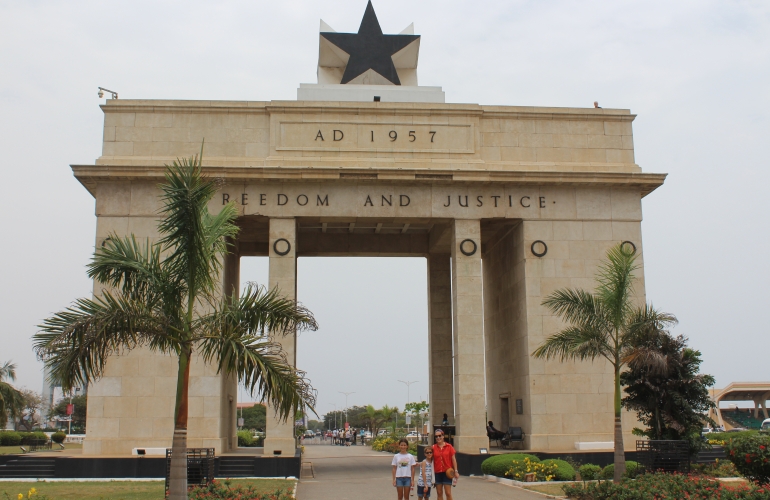 63 years ago Ghana gained its independence from the British and its name changed from the Gold Coast to Ghana, with Dr Kwame Nkrumah sworn in as Ghana’s first president. To commemorate this important day we enjoyed a public holiday a month ago on Friday 6 March. As it was the last Independence Day we will have here we decided a little history lesson would be good for all of us.  So after a delicious breakfast at the recently opened Concrete Jungle coffee shop, we made our way to the Kwame Nkrumah Memorial Park. The park was opened in 1992 and is situated on what used to be the colonial polo grounds.  Although children wouldn’t have to attend school on this holiday, there are several school groups already at the park gathered under the trees, clad in their uniforms, listening to their teachers telling them about their country’s past.

We enter the park and approach the Mausoleum, which houses the bodies of Ghana’s first president and his wife Fathia Nkrumah. The pathway we walk along is flanked by two springs of water, symbolic of life, and sculptures of men who are blowing flutes.

One thing I love about Ghana is the warm welcome you always get when you arrive somewhere and today is no different as in Ghanian culture flutes are blown on special occasions and to welcome dignitaries. “You are welcome” is what we hear when we enter a shop, a restaurant or return home from a trip upon seeing our domestic helper and driver for the first time again. When our parents and friends have arrived to visit us here, I’m always so heartened to hear the lovely “Akwaaba” as they enter our compound and home, which is the local Twi welcoming word. From photos I have previously seen, the sculptures of these bare-chested men blowing their flutes are meant to blow fountains of water, but on the day we visit the water levels are very low in the springs. These aren’t the only bare-chested men around as there is a group of body builders with their shirts off posing for what is likely their Independence Day ‘Instagram shoot’ in the same pose as the big bronze statue of Kwame Nkrumah with their hands triumphantly pointing to the sky!

The Mausoleum is said to be designed in the shape of upside-down swords, which in the Ghanian Akan culture symbolises peace. Others view the shape of the Italian marble clad structure as an upside-down tree representative of Nkrumah’s unfinished work. The symmetrical bold design of the building is unusual and the marble cladding all around in varying shades of grey reminds me of the feathers of a pigeon’s plump body but without the softness!  The black star of Ghana’s flag that demonstrates unity and African emancipation also shines brightly at the top of the Mausoleum in the broad daylight blue sky.  As we approach the building, a sign next to a tree catches our eye with a familiar name on it and we learn that this mango tree was planted by Nelson Mandela when he visited the memorial in November 1991.

We step into the building and the sky light above illuminates the tomb where Nkrumah’s body was laid for a third time.  He was originally buried in Guinea after he died in Romania in April 1972 where he sought medical treatment. Nkrumah was the co-president of Guinea and had been living there in exile after his government in Ghana was overthrown in 1966 by a military led coup. His body was later returned to Ghana and he was buried in the village he had grown up in, but when the Mausoleum was built his remains were moved here and interred. In 2007 when his wife died, her body were laid to rest with his.

Today in this cool, elegant marbled space with striking arches and angles and contrasting spaces of light and shadows, a ceremony is taking place with members of the CPP political party standing around. One of the party members is sitting on the tomb and his song to Nkrumah fills the space while he waves a white scarf around that is covered in the red rooster party emblem. Quite interesting to watch! We feel the warmth of the sun again as we exit and coincidentally a chicken goes clucking past!

A beheaded statue up ahead causes the kids to laugh at how ridiculous it looks to see a body missing a crucial part that is now resting next to it and a pac man bitten chunk missing from his leg. But of course the happenings that lead to this aren’t humorous at all. This headless statue of Nkrumah was decapitated during the above-mentioned coup in 1966, and his head that is now positioned next to his body was later returned by a citizen and released to the park in 2009.

Next we visit the Museum building that is covered in hieroglyphic images as a tribute to Nkrumah’s Egyptian wife. For 2 cedies you can buy a pamphlet with a few photos and mainly dates of important events in Ghana’s journey to Independence. The walls inside are covered with framed black and white photos and are a fascinating glimpse into Nkrumah’s time of governance and the early days of an independent Ghana. He is photographed with famous people like Queen Elizabeth II, Pope Pius XII, John F Kennedy, Fidel Castro, and the leaders of dozens more countries.

Incredible exaltation and triumph can be seen in the faces of the leaders who fought tirelessly during the struggle for freedom including the famous picture of the declaration of independence on 6 March 1957. No photos are allowed in this space but dotted around the room is memorabilia from Nkrumah’s life from his humble belongings like his glasses case and glasses, a wooden chest and book case he used in his student days, to a number of books he wrote and the coffin that contained his embalmed body when he was buried in his village.

I’m glad our family is always up for an adventure, and after leaving the park we decide to walk to the Black Star Square that is also known as Independence Square. We pass the beautiful white stately looking buildings of the Supreme Court on our left and the road that we usually take to enter Makola market, which is very close by.

The midday heat is intense and we are so happy to spot a lady with a big metal bowl on her head, the colourful cooldrink lids peeping out from the rim are promises of that wonderful burny sip of icy cold Coke when you need it most! She places her selection of drinks that she carries in cold water on the floor, next to her stars and stripes scarf that is rolled into a doughnut like shape to enable her to balance this heavy weight on her head. On Ghana’s Independence Day the irony of another emblem of far wealthier Independence doesn’t escape me in that moment. The sweet smell of coal roasted plantains fills the balmy air. There are only two Cokes available but Emma and Jack are happy with most fizzy, sugary options on offer and we carry on, grateful for the cool refreshment.

28 February is another significant day in Ghana’s history as it was the day that in 1948 the Accra riots started. These protests by unarmed ex-serviceman were broken up by armed police forces and resulted in the killing of several group leaders, and this incident is considered to be the final straw in the struggle for independence.  The last day of most February months is also a very important day in our family’s life as just the week before on this day Jack had blown out 8 candles on his cake! So under the road name of his birthday I capture him and his orange stained upper lip, a trademark of being a kid and delighting in a bottle of Fanta 😊

After a half hour walk in totally inappropriate non-walking shoes we arrived at the massive Independence Arch that is really cool to see this close, having only driven past it before. It was completed in 1961 which coincided with Queen Elizabeth’s visit to Ghana and a plaque states the intentions to honour this arch to her. To read about why that trip was a controversial one for Queen Elizabeth and to visit the Osu Castle with me – another important part of Accra’s history, see one of my previous posts here.

Both the Memorial Park, Independence Arch and Osu Castle appear on Ghana’s bank notes and Emma and Jack are excited when we get out our wallets to show them this!

We spend a little time cooling off in the shade of the arch, taking in the detail of the red and gold squares indented in the high ceiling like a pretty upturned, empty chocolate box. The soccer stadium next door is busy with passersby, a man pushes his icecream cart and has a clever tune playing on repeat through his megaphone, announcing the prices of the well known and loved Fanice and a group of energetic rollerbladers whizz past gaining speed on the round of the circle which is clearly a regular highlight on their route.

It is now simply too hot and our feet are too sore to contemplate the walk back to the car so we flag down a small red and yellow taxi. We get into the car and the driver grins and thanks us as we wish him a ‘Happy Independence Day’. It has been an interesting morning. We have all gained some blisters from wearing our slops on the walk, but also some good historical knowledge about this country we will always be thankful to have called home!

Adventurer. Blogger about expat life in Accra, Ghana. Noticer of the beautiful normal. Lover of bright colours, photos and all things creative. View all posts by lolsimpson

This site uses Akismet to reduce spam. Learn how your comment data is processed.

I am Lauren, a South African who has been living in Accra, Ghana with my wonderful family for the last 3 years. We came here for my husband’s work and have fallen hard for this delightful West African country. I’ve always loved taking photos and here in Ghana I’m forever seeing clusters of colours and noticing the extraordinary in the ordinary. As I also have a great love for words, I have created this space where I combine these two things I am passionate about, to tell the stories of our marvellous adventures so far. Thank you for reading! 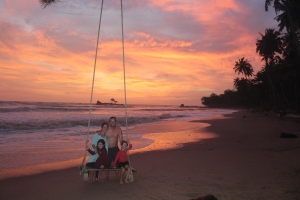